There lies a mirror of hope amid our pain, where we can see the reflection of the person we love the Most. one word or caress from that person can heal us even in our worst days. 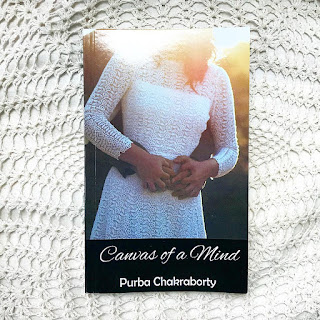 What lies within?Akashi lives with her younger sister, Ipsha in Kalimpong, a remote hill station. Their tranquil life turns upside down with the arrival of a stranger in the town, who stalks Ipsha desperately. He tries to lure her by sending love notes and playing a haunting tune on his harmonica, without revealing his identity and showing his face. As Ipsha gets bewitched by him, Akashi tries to protect her from the creepy stalker. She tries to solve the mystery of the stranger and gets shocked by certain revelations. Meanwhile, she realizes that her sister has been deceiving her at every turn of the road.Why is Ipsha deceiving Akashi? And, what does the stranger exactly want from the two sisters? Will Akashi be able to save her sister from the darkness she is walking into? Or will she be shattered, knowing certain things about her sister that she had no idea about?Taut with suspense, “Canvas of a Mind” will take you on a riveting ride. Are you eager to know what lies within?

Firstly, the name “canvas of a mind” impressed me and I was interested in reading this book. This attractive name and beautiful cover of a book have a beautiful story within.

The story starts with two sisters living in a remote hill station. Akashi and Ipsha, two different personalities, completely opposite from each other. After their parent’s death, Akashi took all responsibility of her little sister on her shoulders. The story starts with celebrating Akashi’s birthday where Ipsha receives a note from a stalker. She receives such notes from 2-3 days and becomes desperate to meet that stranger. Once she meets Arjun, she falls in love with him and decides to tell Akashi. When Akashi meets Arjun she gets a feeling that she has seen Arjun somewhere. Later she comes to know that Arjun is a Criminal. SHe tells Ipsha but she denies to believe her. Arjun and Ipsha go out where Arjun gets into a fight and is dead in front of Ipsha. On the other side, Ipsha claims to bring Arjun home and warns Akashi if she calls Police, she will do something to herself.  She then cuts her wrist. Later when she’s hospitalised doctors come to know that Ipsha is suffering from Schizophrenia after she saw Arjun die in front of her eyes.


Well, Again I finished this book in one go. This book is beautifully written and it holds reader interest throughout. A simple Language with appropriate content and properly plotted book it is. How Akashi never lost faith and stood by Ipsha’s side forever. Vihaan and Akashi’s unbreakable bond is also beautifully described. We never know what a person is actually suffering from until we go to the depth. This is the simplest psychological thriller. A neat, clean and beautiful plot with the awesome narration of every character. How she managed to keep suspense till the very end.
With amazing mystery ‘Canvas of a Mind’ is a perfect read, which you should not miss!

Publisher: Become shakespeare.com
Author: Purba Chakraborty
Rating: 5/5
You can get your copy here.