Only when lovers are separated they realize how much they are in love.

Separation is the real litmus test. 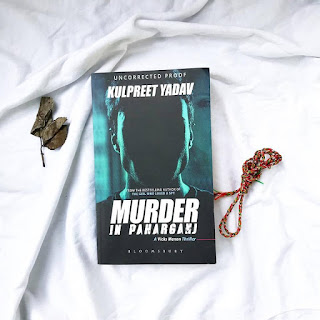 On a cold December morning, a white woman is found murdered in a cheap hotel in Paharganj, New Delhi. Vicks Menon, an out-of-work journalist, is tipped off by the hotel’s receptionist and is the first to arrive at the crime scene, where he discovers a lead. It’s the bus ticket used by the dead woman two days earlier. But Vicks is battling personal trouble. He has no money, an alcohol problem, and a nearly broken relationship with Tonya, his estranged live-in partner, a clinical psychologist who specializes in profiling hardened criminals. Moving in and out of the shadows, Vicks pushes his investigation harder as it takes him from Udaipur to Bangkok. On his side, for resources, he has a nameless intelligence operative, and to read minds, a lover who is beginning to trust him again. But above all, his instinct to stay inches ahead of death will be the key to his survival. If Vicks lives, this is one story that will change his life forever.

It’s one of the interesting read in crime fiction. The plot that author has built is really amazing and the third person writing develops the interest in reading. Every character had a unique personality with some their specialties. The story had everything, from romance to crime, from friendship to mystery and Drama. Simple writing style with switching chapters linking the story is wonderful.
The story focus on Vicks who lost his job and this Murder happened in a cheap hotel of Paharganj was his freelancing report with which he can get his job back. With his job, he lost Tonya also, Love of his life. He was the first one to reach when this murder happened. Soon he started investigating on this story. The troubles that he faces while investigating is written really well, how he links each and every clue. Then the story focus on ACP Rao who was also investigating on this case, where he wanteVicksks as he was first to reach there and police thought he was the murderer. When Vicks told him, his part of the story he was convinced with Vicks.  In the process Vicks was attacked by someone and was hospitalized, There’s where Vicks dad came in the picture, he told him he is weak, he is a sissy and told him he fixed a job for him. Vicks was never going to take help of his dad. With help of ACP Vicks still continued his investigation.
The author has beautifully narrated the circumstances that a crime reporter face, How Vicks lost everything and with his one story he got everything back, his love, respect and a good job.
Though the end is very fact, details are missing. it should have been more lengthy. There are some places where the plot is shifted to some different character which leads to confusion.  It felt like everything is going fast without precise details. There are so many characters which confuse reader because of sudden switching of plots.

Though it’s one of the crime fiction read that I liked most as it still manages to hold the interest of a reader. It’s like a puzzle, every piece adding and completing a story. Till the end secret is not revealed which makes reader curious. well, simple language adds a cherry on the cake. The reader enjoys it. I also loved the cover of the book, it’s full of mystery and very attractive.
I would recommend this book to everyone who is looking for in crime fiction.

You can Get your copy here.
** I received a copy of the book from Bloomsbury India in exchange for an honest and unbiased review**