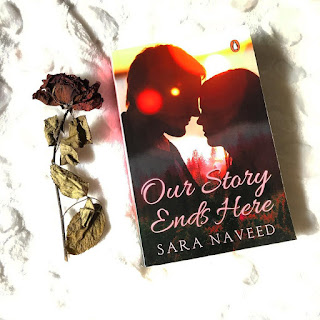 Meher, an army general daughter decides to go to Swat Valley with her college friends.
where she met with an accident and met Sarmad. Sarmad, a terrorist. He took Meher away from the accident spot and was searching for help where they met Bari Appa. Bari Appa helped Sarmad and bought Meher home. They both had to stay with each other for few days. The story becomes Interesting when Meher falls in love with Sarmad. What will happen when she will know his true identity. will she still love him? What has destiny planned for them?

Review:
The story starts with a Bomb blast at Lahore Bazaar where Imar, Meher’s brother was also there. Because of a bomb blast, Meher lost her brother and family was going through trauma. A story starts with Sarmad trying to save Omar’s life but he fails to, though it was his group who planned this blast. Why will he try to save him? what was the connection? were various questions that popped up.

On the other hand, after situations settle, Meher’s Sister Sidra got married and everything was back to routine. Meher’s college friends decided to go to Swat Valley after their exams. They all got permission from their parents where Meher was still deciding whether to ask their parents or not. Since She only used to go out with her parents. Finally, her parents give her permission to go with her friends, she also got a big shock when she got news that her engagement was fixed with one of her cousins. She needed this trip where she could live for herself, be herself.

Finally Swan trip was on, their bus halted where her eyes met Sarmad. she felt an instant connection and urge to speak to him. Speak to a stranger! she finally has small conversation with him and goes to her bus. his bus is behind her bus though. Their paths meet when Meher’s bus met with an accident and Sarmad leaving his group went to save Meher.

Sarmad and his group on other hand are on their secret mission for another terror attack. Then why he saved Meher’s life? Why he went away from his group? Meher was unconscious, he took her in his arms searching for help where he met Bari Appa, who offered them help when Sarmad claim Meher as his wife and they were going Swat for Honeymoon. Bari Appa got convinced and took Meher to their home and gave her treatment. Once Meher gained consciousness the family requested couple to stay for few days as there was a wedding in a family to which meher agrees. Living with Sarmad for few days, she was attracted to him and was in love with him until Sarmad revealed his true identity.

The book has ups and downs this coupled faced and is full of suspense how Sarmad secretly worked for an army and gave information of terror group’s activities. how Meher and Sarmad already met in their Childhood and they were attached to each other in their childhood too. How she was never able to recognize Sarmad, her childhood friend until she found his journal. How army saved his life but his own uncle let him to death. The story is beautifully written but there are two sides of a story- one from Sarmad’s side and other from Meher’s side makes it a bit confusing but worth reading.
The story caught my interest in the second part when Sarmad true identity was revealed and how finally these two hearts met though death came to them.
The story of love, fate, destiny is very interesting, full of suspense, mysteries and is worth reading.

** I received a copy of the book from the author in exchange for an honest and unbiased review**
Get your Copy here.
Blog by Vidhya Thakkar

Book Review: Why I am a Hindu by Dr. Shashi Tharoor

Get all latest content a few times a month!