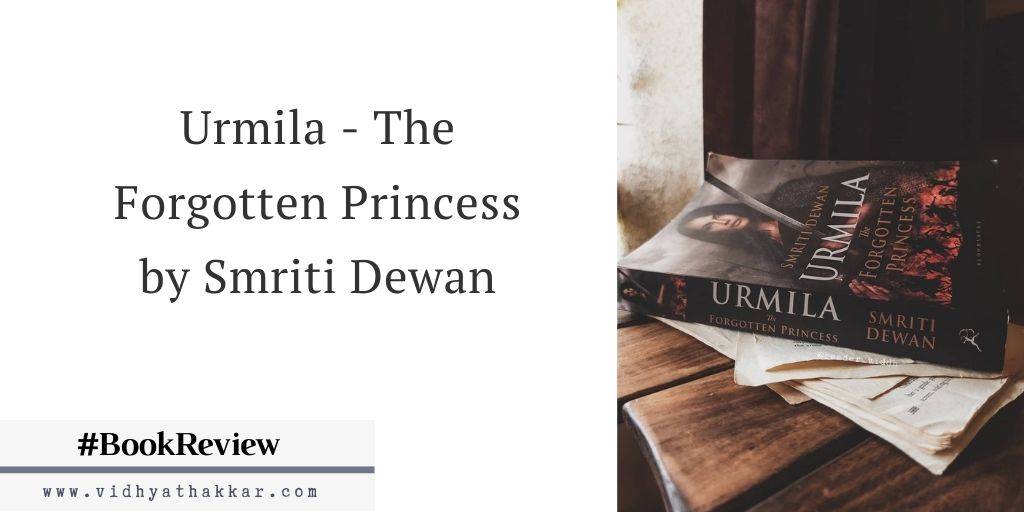 It’s a crazy book for all the Mythology lovers, yes. This book has changed something in me forever. Urmila’s charm and her journey is worth witnessing!

• We were put on earth to show the world something else, Perform your role and leave, never overstay your welcome.•
Click to Tweet

I would not lie, I was impatient to share my thoughts on this book.
They say, READ BETWEEN THE LINES, THERE’S ALOT TO DISCOVER, and this is one such book where you will find the hidden meanings between the lines.

We always hear stories about Ram, Lakshman and Sita’s Vanvas, how their life was in the forest, the difficulties they faced, Sita’s abduction by Ravan and Ram and Ravan’s war.

Did we ever wonder what happened in Ayodhya in Ram’s absence? Did Bharat really handle everything while dealing with the betrayal from her mother? How was Ram Rajya secured in Ram’s absence?

This book has answers to all your questions. We call Sita, Janak Putri Sita, but did we know about her childhood? Her bonds with her Maternal family? In Ramayana, did we ever think about the lives that were impacted when Ram went on Vanvas? Did we think about the Unsung Heros of Ramayana? Did we think, about Urmila’s Sacrifices? Her relationship with Lakshman? The lives of Janak Putri’s and the future of Mithila?

Did we think about what happened to Urmila when Lakshman went to Vanvas with Ram? Did we know, Urmila was the heir of JhanakPuri? Her contribution in shaping Ayodhya and Mithila?

Did we know their Guru was Guru Gargi, Rishi Garg’s Daughter, Did we know about Urmila’s Grandmother Netraya from the Kingdom of Patkai? How Urmila’s and Lakshman’s relationship changed when he returned from Vanvas? What was the Future of Mithila?

Urmila’s relationship with her mother in law’s and her confusion for Kekai and Kekaya? Did we know about Sankashya? Mandvi’s kingdom?
Did we know Queen Sumitra’s Father’s role in Ramayana? In the Ram Rajya?

With all the questions Smriti Dewan weaves an amazing tale of the forgotten Princess ~ URMILA.
I have always loved Urmila in every story I heard and this book made me love her even more.

I loved how she portrayed the land of Mithila and Ayodhya, the situations that shaped the kingdom. The childhood of the four sisters. Narrated from Urmila’s Perspective, we can now see a different version of Ramayana. The fall and rise of Ram Rajya.

The way the author weaved a beautiful story is commendable. As the story proceeds, it will astound you will twits that came on your way. The fearless, innocent Urmila and her sisters. The love they shared, the different personalities they had and the way they adored each other.

Read it all, from their childhood to choosing their Guru to their days in Gurukul to when Ayodhya’s prince visited Mithila. The descriptive narration with an engaging writing style the author impress the readers with her words.

The way every emotion is portrayed and the way the author described the perspective of each personality is commendable.

There are unheard stories that will surprise you. I loved how insightful this book is. The amount of research the author did is commendable.

The strong, fearless and promising characters are developed by the author. One could relate to every situation and will make you think.

Urmila’s witty character, her bravery, her dreams and loyalty for her throne, everything was beautifully described. From the story of Ahalya to Shanta to Raja Harishchandra, the author left no stone unturned. From the political games that were played to the wait for Lakshman’s return, Urmila has a story to tell.

From her marriage with Lakshman to her Guru’s Dakshina, Urmila fought a battle. I loved the author gave focused on all the characters, by showing their personalities instead of just one.
Filled with Drama and lots of Twists, this book hold some untold secrets of Ramayana. I loved the later part of the story most

I loved the later part the most. the Queen Urmila, a mother, a warrior. I loved loved the Father daughter’s bond.

It’s a bit heavy read and a smooth paced story. Did we know about Nidra, that was gifted to Urmila by her Grandmother? I loved how the author described the happenings in Ram, Sita and Lakshman’s lives when they were on Vanvas. The author told their struggles, the whole Ramayana through her Nidra. I loved that part the most.

How beautifully two parallel plots were narrated by the author. Not to forget, the cousin’s bonds between Their kids. Yes, you heard it right, the kids of the four sisters. The bond between Luv, Kush and the other kids .(Not spilling out the beans, you must read this book to know an amazing unheard journey).

How Urmila missed Sita when she decided to go back to Mother Earth, how she found the essence of Sita close to her heart. Urmila’s journey with lord Parshuram and Guru Vishwamitra. Her encounter with Mantra.

From Urmila’s strong opinions and Janak’s support and love for the daughters, Mithila left no stone unturned (read to know why and how).

It’s a crazy book for all the Mythology lovers, yes. This book has changed something in me forever. Urmila’s charm and her journey is worth witnessing!

The destinies of the two princesses of Mithila had always been decided. Strong-headed and resilient, Princess Urmila is the heir to the throne and the keeper of the sacred bow Pinaka. Her sister Sita is intended to wed the next Vishnu. But Urmila’s plan changes when she bumps into the rude, temperamental, lesser known Prince of Ayodhya, Lakshman.

Lakshman vows to become Urmila’s royal consort in Mithila. But a failed assassination of Ram and the brutal murder of King Dashrath leads Lakshman to ask Urmila to abandon her future to protect the throne of Ayodhya while he helps build a secret weapon to match the one Lankapati Ravan was building.

When Ravan kidnaps Sita, the ensuing war spreads beyond Lanka to northern India, as Ayodhya’s neighbours try to take over the kingdom. It is up to Urmila and her sisters to protect Ayodhya’s throne. The only way to do that is to revive the Pinaka through an ancient tablet whose pieces are in four different ancient kingdoms.

Urmila now has an impossible choice to make. Should she protect Mithila as is her kshatriya duty? Or should she keep the promise she made to her husband in exile to protect Ram’s throne?

‘This blog post is part of the blog challenge ‘Blogaberry Dazzle’ hosted by Cindy D’Silva andNoor Anand Chawla in collaboration with RRE Studios and ShowCase Events.’

Vidhya has
read 32 books toward
her goal of
101 books.