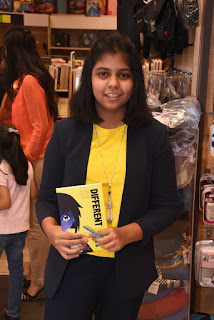 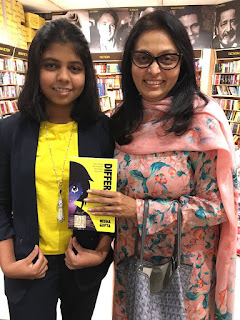 The book makes a case that youth can make a difference if they’re engaged and active.
Speaking at the launch Arundhati Bhattacharya said, ” The youth may not be involved in the way we want them to be, but in their own way. ‘Different’ is a book about managing a situation that is not of your own making, by treating it as a challenge.”
Commenting on the launch of her debut novel, author Neeha Gupta said, “ I’m delighted that through the sales of my book, I can contribute to Kailash Satyarthi sir’s Surakshit Bachpan Fund. My book is a fun sci-fi book, where a bunch of teenagers take up a challenge and deliver when it really matters. Like them, I too will do my best and sincere efforts towards this cause.”
This book is published by The Write Place, a publishing arm of Crossword Bookstores. It takes the premise that teenagers aren’t as indifferent as they’re made out to be. They pull up their socks and deliver when it really matters.
Anup Jerajani from The Write Place said “This is a proud moment for us that teen authors are looking beyond themselves and rising to the challenges we face. ‘Different’ is a book with a purpose.”
Also present at the launch were a patron of sports Vita Dani, designer Archana Kochhar, and veteran bureaucrat Chandra Iyengar.
About the Author
Neeha Gupta is a fifteen-year-old author. She has been an avid reader since childhood and had always wanted to write a book. Different took shape after several attempts at blogging and self-introspection. She believes that sports is an important balancing factor in her life, having played national level Table Tennis representing Maharashtra. She re-invented herself to become a State Level Pistol shooter, and now intends to pursue the sport. This is her first novel.
About the book
Neeha Gupta’s debut book is the story of Nicole Grace, the only surviving member of Bridgen – a planet in the neighbouring galaxy, Andromeda. Her father, an exemplary scientist, had sent her in a ‘space suit’ to earth, when she was only 4, just her before own planet Bridgen was getting destroyed. ‘Different’ traces the journey of ‘superkid’ Nicole, who has a photogenic memory. Her struggles to adjust to earth, how her past reappears and makes her a contributor to her school and to the planet.
Blog by Vidhya Thakkar