It’s not mine, It’s not yours,
Though imperfect, it’s ours.
We gotta breathe
We gotta Laugh
we gotta live.
can you hear me?
This story belongs to US. 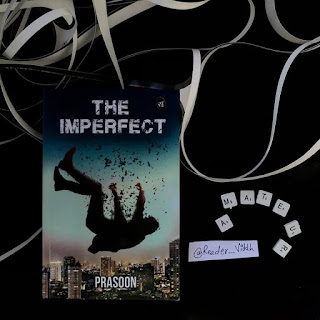 Rishabh is madly in love with Aarti. Has been, ever since he first saw her.For her, he is her best friend… forever.Ruhana is smitten with Rishabh, but he thinks of her as just an amigo.Priyanka is about to marry Rishabh, but he isn’t sure if he loves her.Shefali is carrying Rishabh’s child and his mind is a total mess.While Rishabh is caught in the whirlwind of relationships, one wonderswho he will eventually end up with!Will Rishabh’s imperfect life story have the perfect ending?Will he be able to turn back the pages?The Imperfect is not just a story.It is the mea culpa of a man who did everything in life that he shouldn’thave.

The story is about Rishabh and Aarti The Childhood Friends who never left each other’s side. For Him, it was love, for her It was friendship.  How Rishabh wanted to do something else in life but due to parents pressure he ended up in computers. how his only motto for going college was Aarti. How he finally accepted the truth.

Well Firstly, I loved the cover of the book, It’s quite Attractive. The frustration that a person has when he cannot choose what he wants when everyone has high expectations from that person. Rishabh’s character who was defined as a loser just for not confessing his love, the mentality of parents as girl and boy being best friends. The author covered each and every phase of life in this book. We witness various stage of love and improvement in the quality of life. This book in starting was not that impressive but later it got my interest.  Rishabh’s Character was plotted well. Aarti’s character was strong and played a crucial role. The author very well plotted the story. There were some unwanted paragraphs which were added but it was ignored as the story was good. The pace of the story was lil slow. it was going too slow. The tempo was good as it had some twists and turns which again made it an interesting read. The author used simple language which made this story connecting with readers. The plot of the story was also good. It was impressive as well as connecting. Indian Parent’s Mentality, Confessions, fear, and many such feelings were expressed by the author.

Good characters, simple language, connecting plot made this story an interesting read.
If you like reading Fiction, fantasy, Go for it.

You can get your copy here.