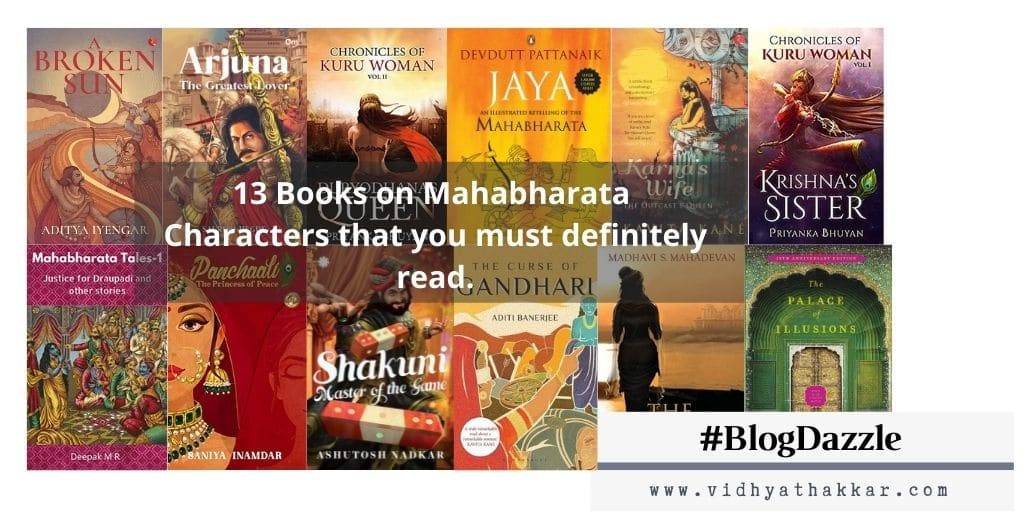 Being someone who loves reading Indian Mythology, I came across many books that gave me a different perspective.

Mahabharata! There’s not a single way we can define Mahabharata. Every Character has their own version of the story, their own perspective and reading from their perspective makes us realize, each one of us has a journey to witness, all we need is to trust the universe, trust Krishna.

Inspired from Simran (craartology) Here are the books you must read if you love to read more about the characters from Mahabharata.

Narrated by Draupadi, Chitra Divakaruni weaves a Heart- Warming tale, it’s an exciting read, full of depth. One could feel the emotions, the thoughts and the situations Draupadi went through. It’s about her, the Yagyasheni.

The novel traces Panchaali’s life, beginning with her magical birth in fire as the daughter of a king before following her spirited balancing act as a woman with five husbands who have been cheated out of their father’s kingdom.
{Source- CHITRA BANERJEE DIVAKARUNI}

Shakuni: Master of the Game by Ashutosh Nadkar

Arjuna is remembered as a great warrior and an archer extraordinaire, but did you know that he was also the greatest lover to have ever lived? Arjuna won Draupadi at her swayamvar as his wife, but were you aware that he had three other wives as well? Abhimanyu was Arjuna’s son. But Arjuna had four other sons, one of whom became his arch enemy.

On the way he meets Ulupi, the Naga princess; Chitrangadha, the warrior queen; Lord Krishna’s sister, Subadhra; and the celestial nymph and dancer, Urvashi. These women, who loved Arjuna deeply, tell the tale of his adventures in love and life in Arjuna the Greatest Lover.

In this book, the author shares about Abhimanyu’s journey, his childhood, his years of training, his love for his uncle and parents, how he went to find Arjuna, how he met Uttara and how he fought the battle. It’s a fast-paced story with a gripping narration. The way the author described everything that happened on the battlefield will give you goosebumps. How he fought alone with the masters till the last breath.

In this book, the author shares about Abhimanyu’s journey, his childhood, his years of Krishna’s sister is a story of Subhadra who played a vital role in Mahabharata. A Strong woman, sister of God, a warrior who shaped Mahabharata even after losing everything. It’s a story of her sacrifice, her faith in her brother and herself. A warrior who ruled Arjun’s heart.
It’s an amazing book. A light and a beautiful read that one can dwell in. The way the author narrated the story is amazing. One can connect well with the book.

The Kaunteyas by Madhavi. S Mahadevan

A book that holds secrets of Mahabharata. I liked how the author narrated the life of Kunti. How she felt when she told Karna the truth, when she told Pandavas the truth and a lot more. The engaging writing style keeps the reader hooked throughout. I liked the way it is narrated, with a smooth flow of words, the author keeps the readers invested in.

It has a lot about Kunti’s life with Pandu, the story of Satyavati, Amba and Ambalika.

Recasting the Mahabharata from the viewpoint of Kunti, The Kaunteyas replaces the idealized mother figure with a fully three-dimensional woman, providing new insights into the epic.

A journey of a Kuru Queen who was forever hidden in the pages of history. Know the love story of Duryodhana and Bhanumati. Did Duryodhana deliberately went ahead with the Kurukshetra war? Was he aware of the outcome of the war and if yes why did he went ahead? What happened to the woman of the Kauravas after the great war? This is the story of a Queen who was born to compete with Draupadi only to go down in ashes in the end.

The Curse of Gandhari by Aditi Banerjee

In this insightful and sensitive portrayal, Aditi Banerjee rescues Gandhari from being reduced to a mere symbol of her blindfold. She builds her up, as Ved Vyasa did, as an unconventional heroine of great strength and iron will – who, when crossed, embarked upon a complex relationship with Lord Krishna, and became the queen who cursed a God.Gandhari has one day left to live.

A Broken Sun by Aditya Iyengar

Narrated through the voices of Radheya, Yudhishthira, Arjuna, Ghatotkacha and Sushasana, A Broken Sun is the second part of Iyengar’s trilogy on the Kurukshetra War and tells the story of the Mahabharata in a way that’s never been done before.

On the other side, the Kauravas, led by Guru Drona and Radheya try desperately to bring the war to an end. Their lives entwine tragically on the battlefield in a tale of loss and redemption.

The accomplished Kshatriya princess, Urvi falls for the Sutputra-Karna, eventually discounting Arjun. She chooses Karna over her childhood mate Arjun and faces fury from many. Caught between the social implications from her act of defiance and her endeavours to gain respect and love from her husband, Urvi’s struggles as the outcast’s queen have been explored.

Jaya: An Illustrated Retelling Of The Mahabharata has the whole epic, which was originally known as Jaya, condensed into a tiny capsule in this book. Other than retelling the interesting parts of the Mahabharata, what makes this book a favourite among the readers is Pattanaik rendering of the various local folklores and tales that are associated with the epic, which have been presented in a whole new genre. With a master stroke, the author has elaborated the storyline by including lesser known folklore stories of the epic, while keeping intact its original form and style.

The 12 unheard tales will astound you. Be it friendship or love, be it the curse of Gandhari or the birth of Duryodhana, to the greatness of Sahadeva, the stories are too interesting. The stories retell great incidents from the epic and gives you an insight about the legendary characters of Mahabharata.

Panchaali The Princess Of Peace by Saniya Inamdar

From her life in Panchaal to how she felt when she was born, how she wanted to understand the emotions, the unconditional love. With an intriguing writing style, the author weaves an amazing tale of friendship and love, of a fearless princess. What I enjoyed most is the conversations between Krishna and Draupadi. The way Krishna explained Draupadi, the way he expressed was just wow. From the story of Damyanti to what love is for Draupadi, chapters like Krishna and Panchaali, Pandavaas, Mahabharata, are amazing.

‘This blog post is part of the blog challenge ‘Blogaberry Dazzle’ hosted by Cindy D’Silva and Noor Anand Chawla in collaboration.’